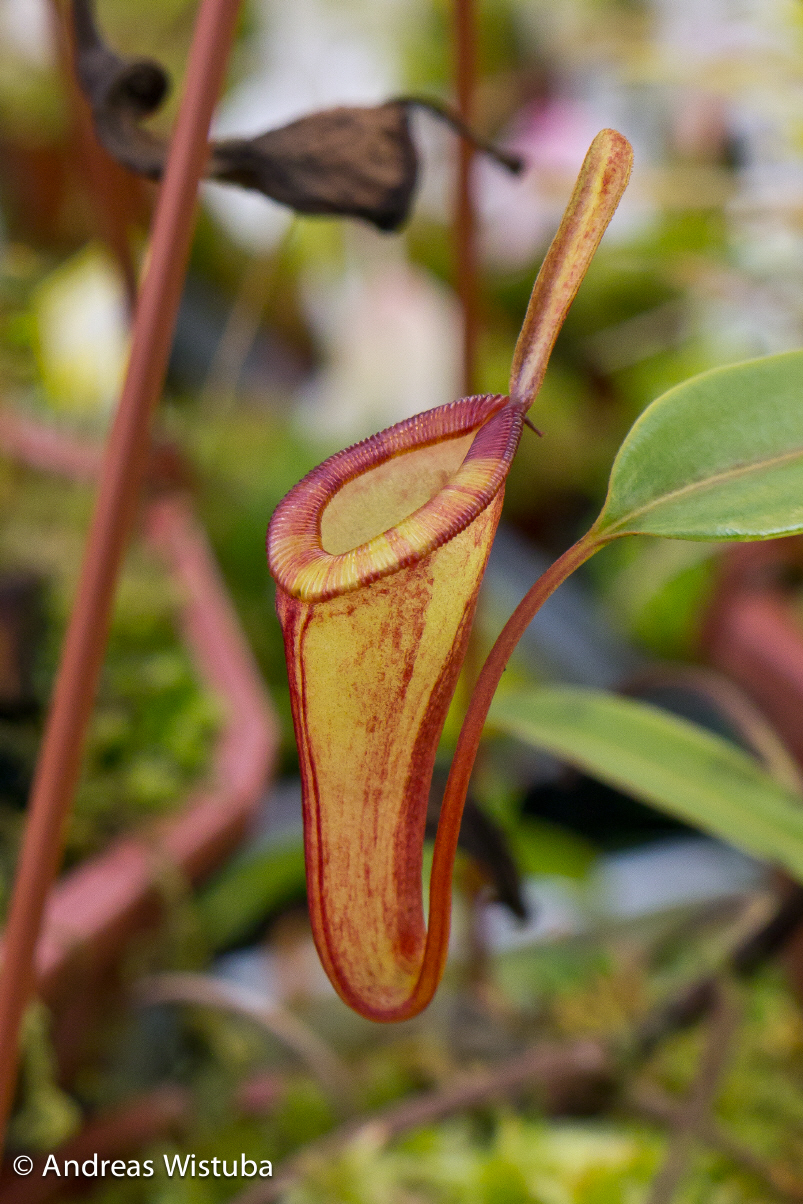 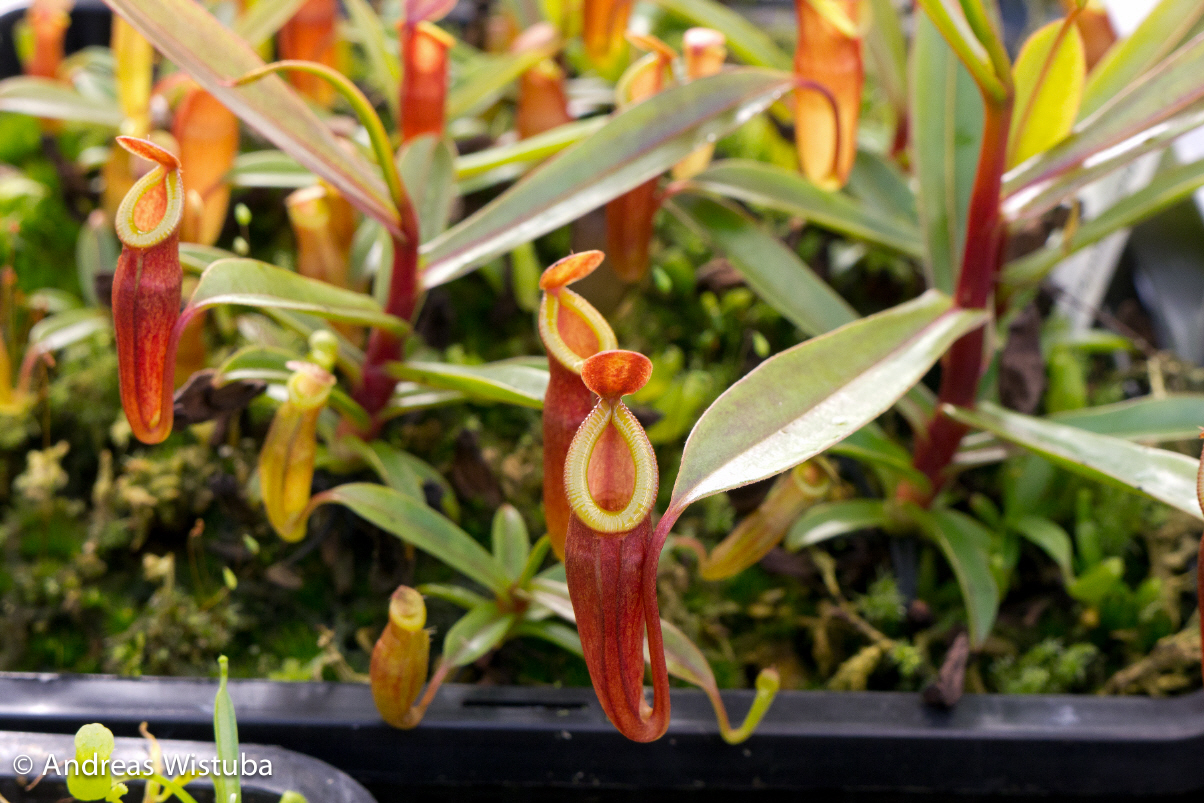 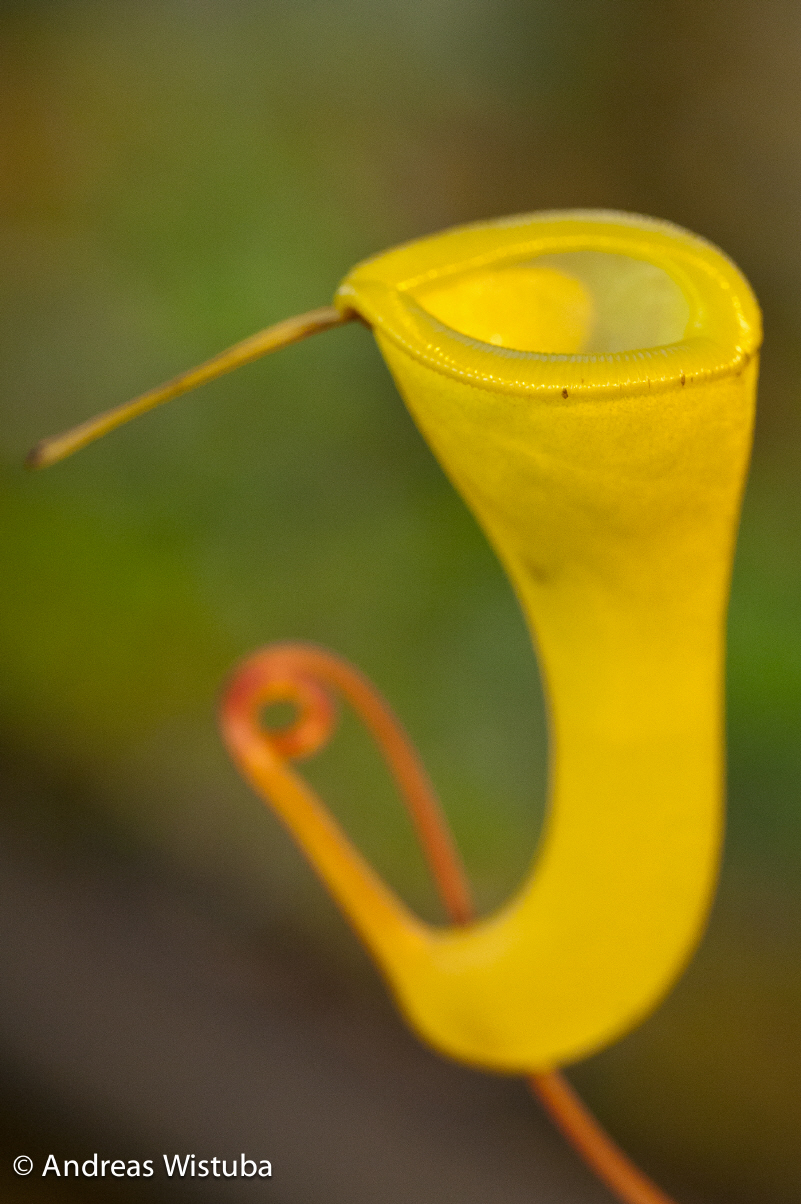 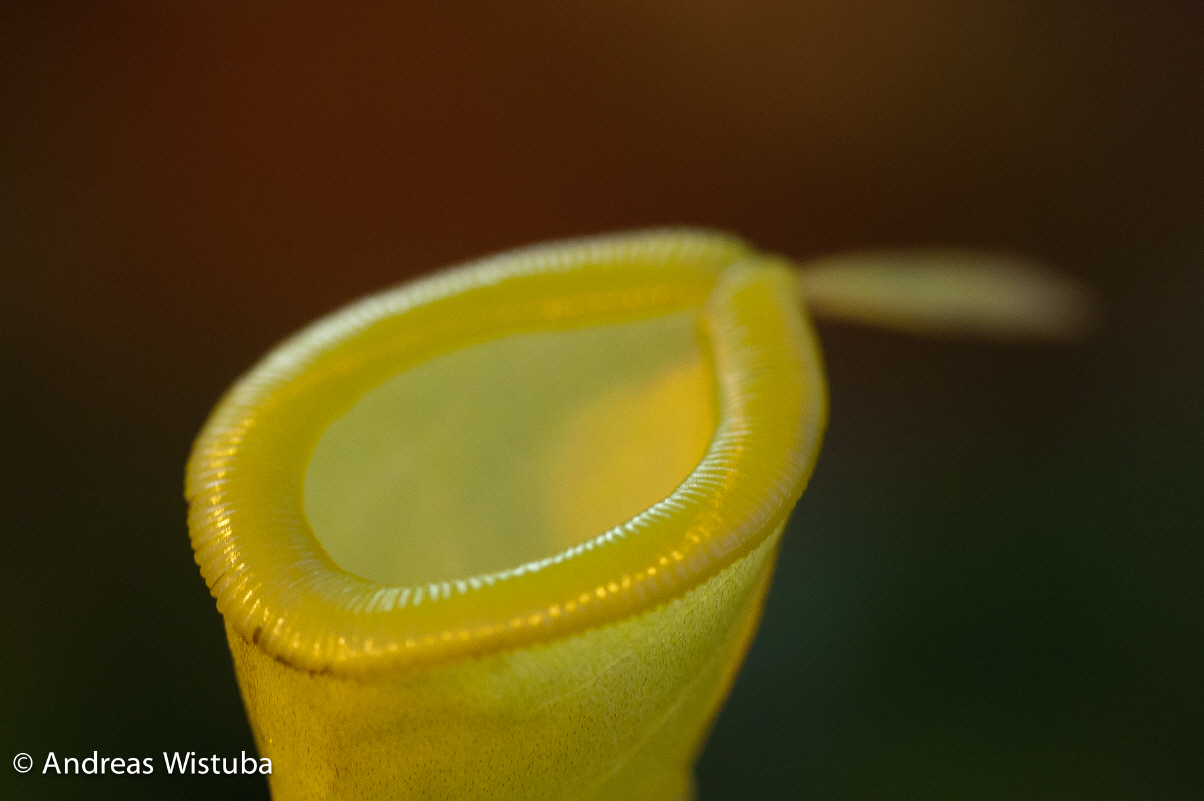 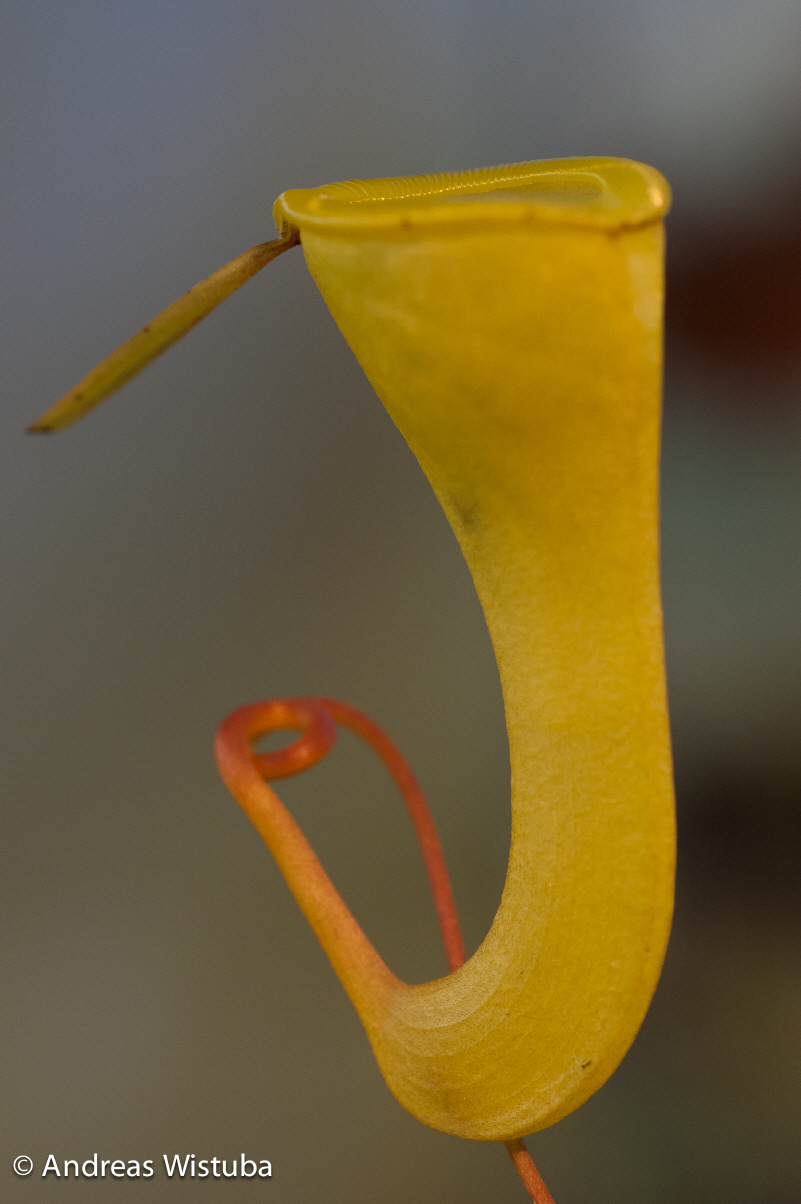 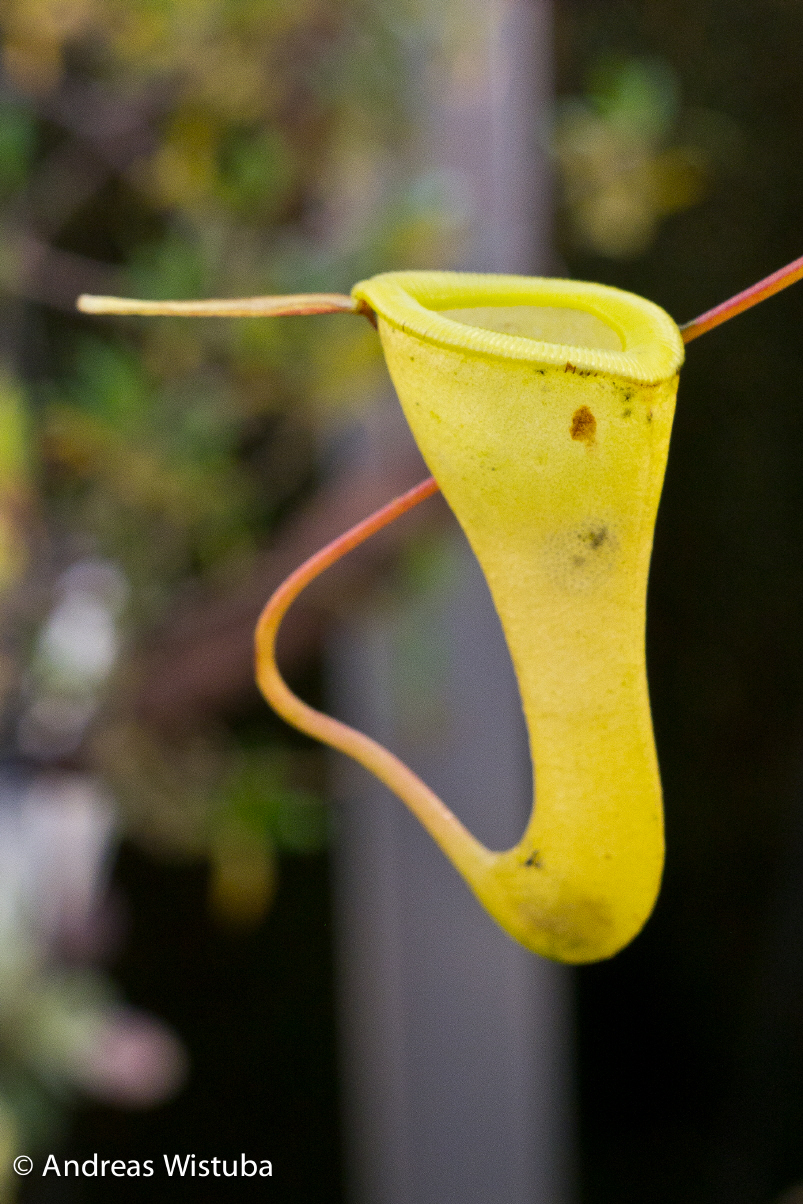 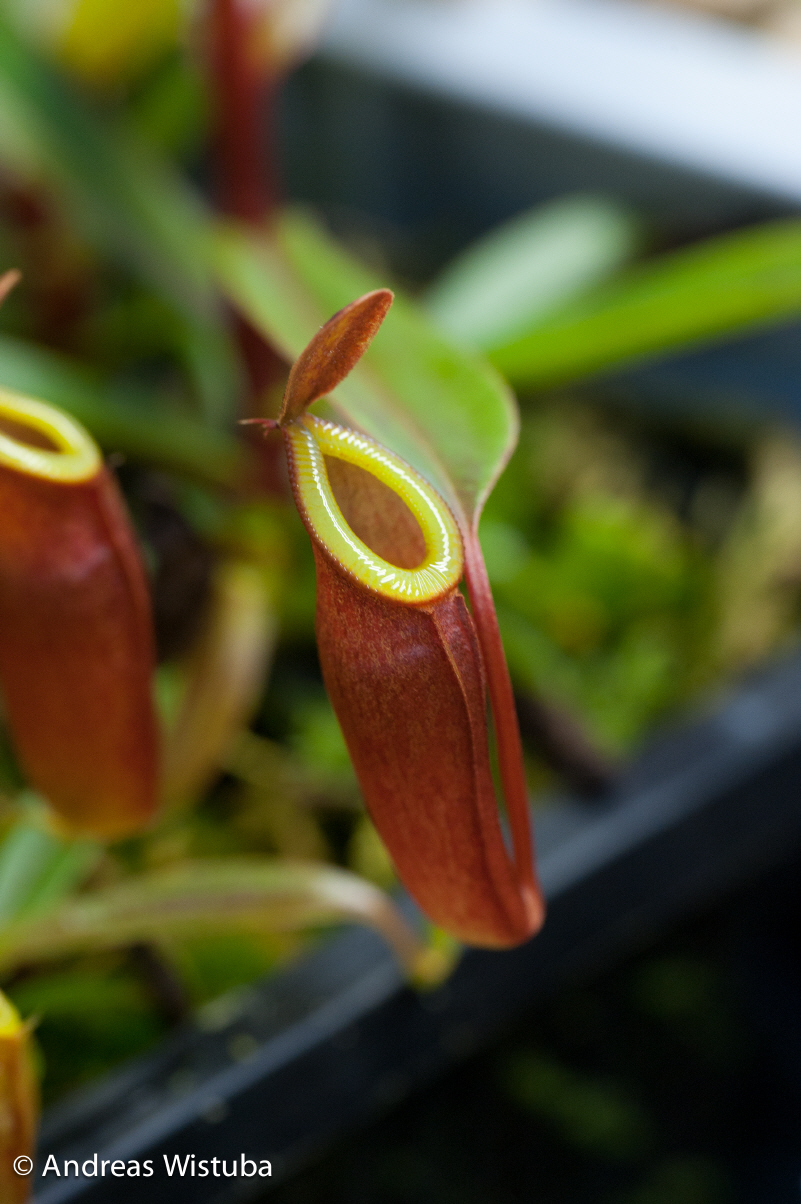 Delayed delivery to non-EU countries
Due to the high volume of orders and the large administrative workload for orders with export documents (phytosanitary certificate, export permits, etc.), orders from non-EU countries currently have a delivery time of 3-4 months. New incoming non-EU-orders are currently scheduled for delivery in June and July!
Product number: AW-N_dub_M.5
Product information "Nepenthes dubia (Malea, Sumatra)"
Nepenthes dubia is known from only two mountains: Mount Talakmau, West Sumatra (1800-2700m asl), and Gunung Malea, North Sumatra (1600m - 2200m asl). These plants are from the second and more recently discovered location.
The lower pitchers of this variety are reddish, and often quite dark. Young plants are much more colorful than comparable plants from G. Talamau. The upper pitchers on this form are pure yellow or yellowish green, as opposed to the more orange uppers from G. Talamau. Intermediate pitchers are often striped.

Nepenthes dubia is a diminutive and dainty species known from only two peaks in the Barisan mountain range of Sumatra. N. dubia is found growing in mossy forests, either epiphytically at lower elevations, or terrestrially in moss clumps at high altitudes (2200m+) amongst the stunted alpine vegetation. It is a true highland plant, though faster growing than many other highlanders.
The name ëdubiaí is latin for ìdoubtfulî referring itís similarity to N. inermis and initially being mistaken for a possible hybrid. Lower pitchers are rarely produced and relatively small, with the rosette stage being short lived. N. dubia quickly vines producing elegant and dainty upper pitchers (8cm). Pitchers are funnel shaped, with the lower part appearing as if pinched and flattened from either side. This creates a very unique and unusual look. While these pitchers strongly resemble those of N. inermis, they differ in having a well-developed peristome. The peristome is relatively (to the small pitcher size) broad and flat, lying horizontally so that the pitchers open upwards. The pitcher lid in N. dubia is also unique in almost always being bent backwards by more than 180 degrees relative to the pitcher opening. The upper pitchers of this species are generally light green to green-yellow in colour, though orange and red forms exist. Lower pitchers are often more colourful, being orange to red in colour. All pitchers produce especially viscous pitcher fluid similar to that found in N. inermis and a few other Sumatran species. This is hypothesized to enable pitchers to function as flypaper traps as well as typical pitfall traps. The characteristic red to purple tendrils found on the majority of plants are also a notable and interesting feature.
Overall both plant and pitchers, while remaining small and elegant, possess lots of interesting detail and are incredibly unique and charming.