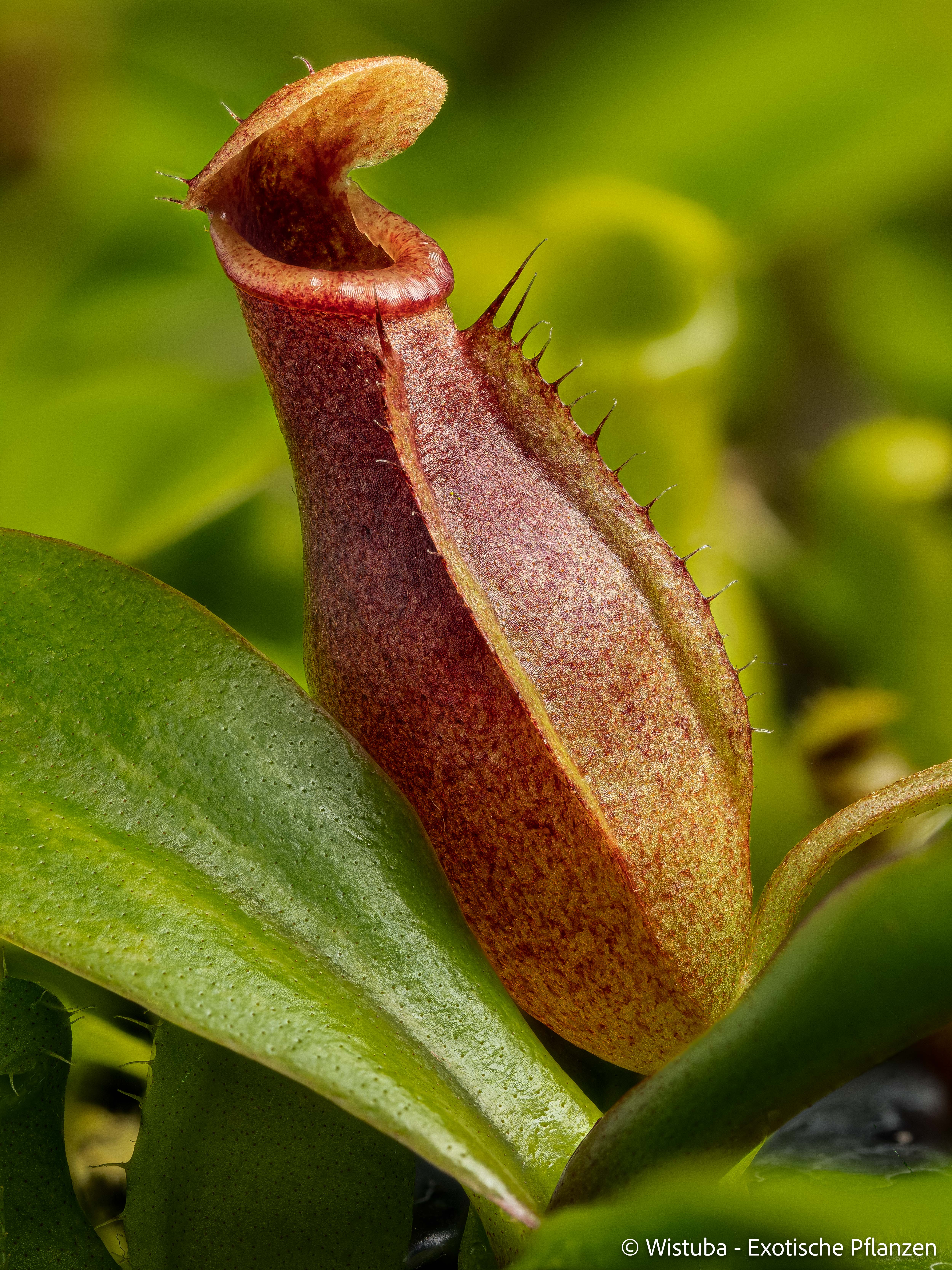 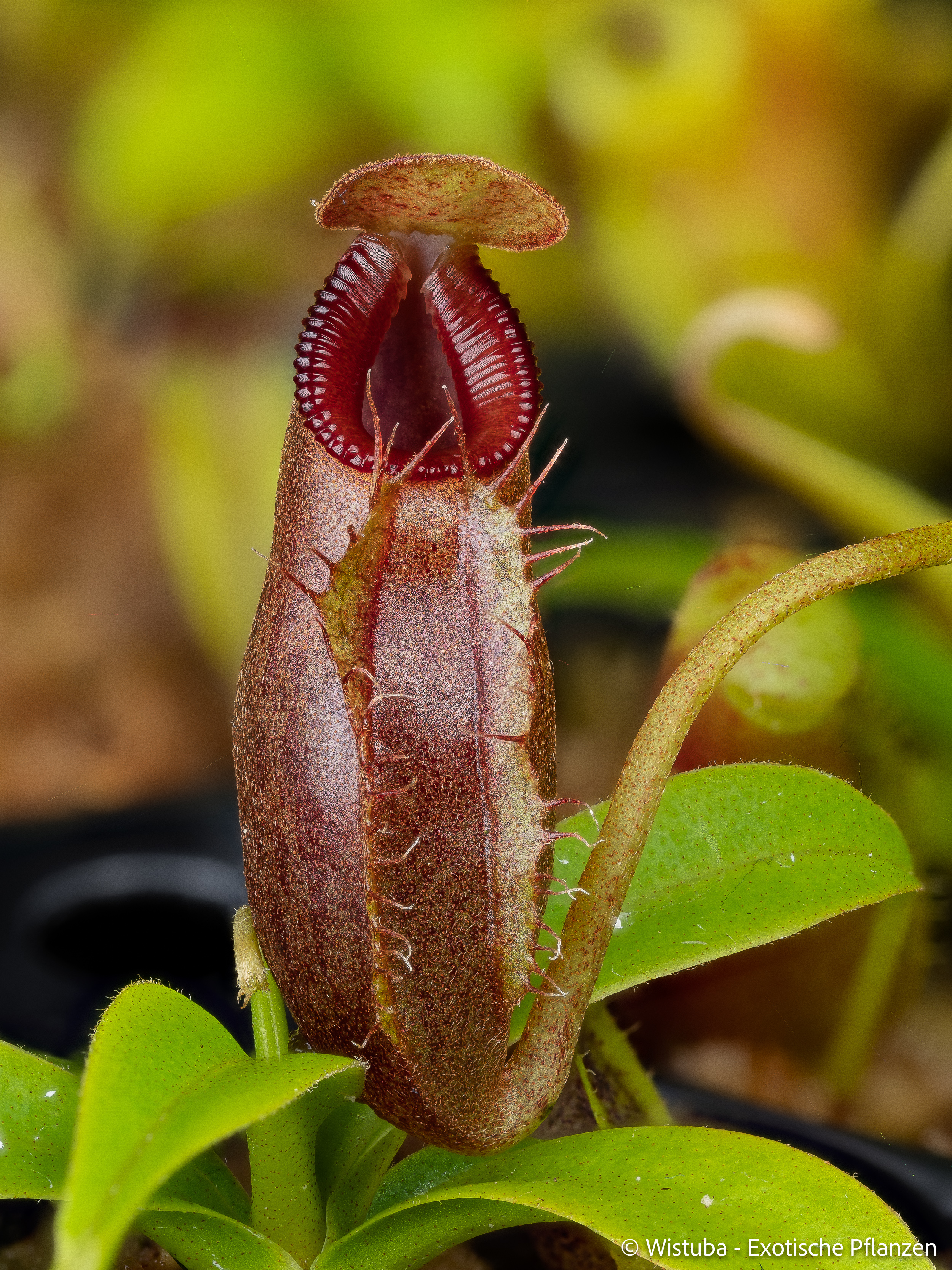 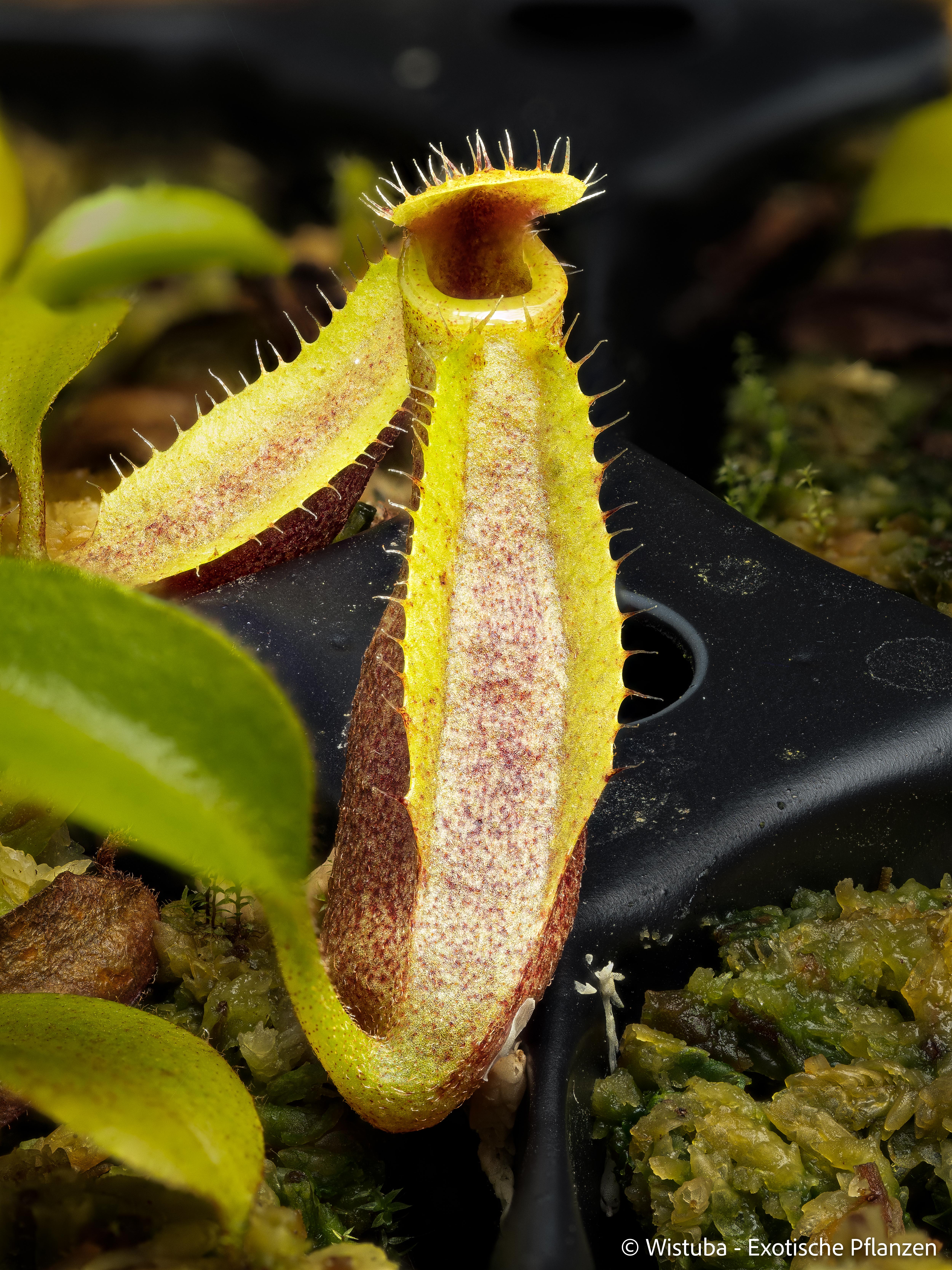 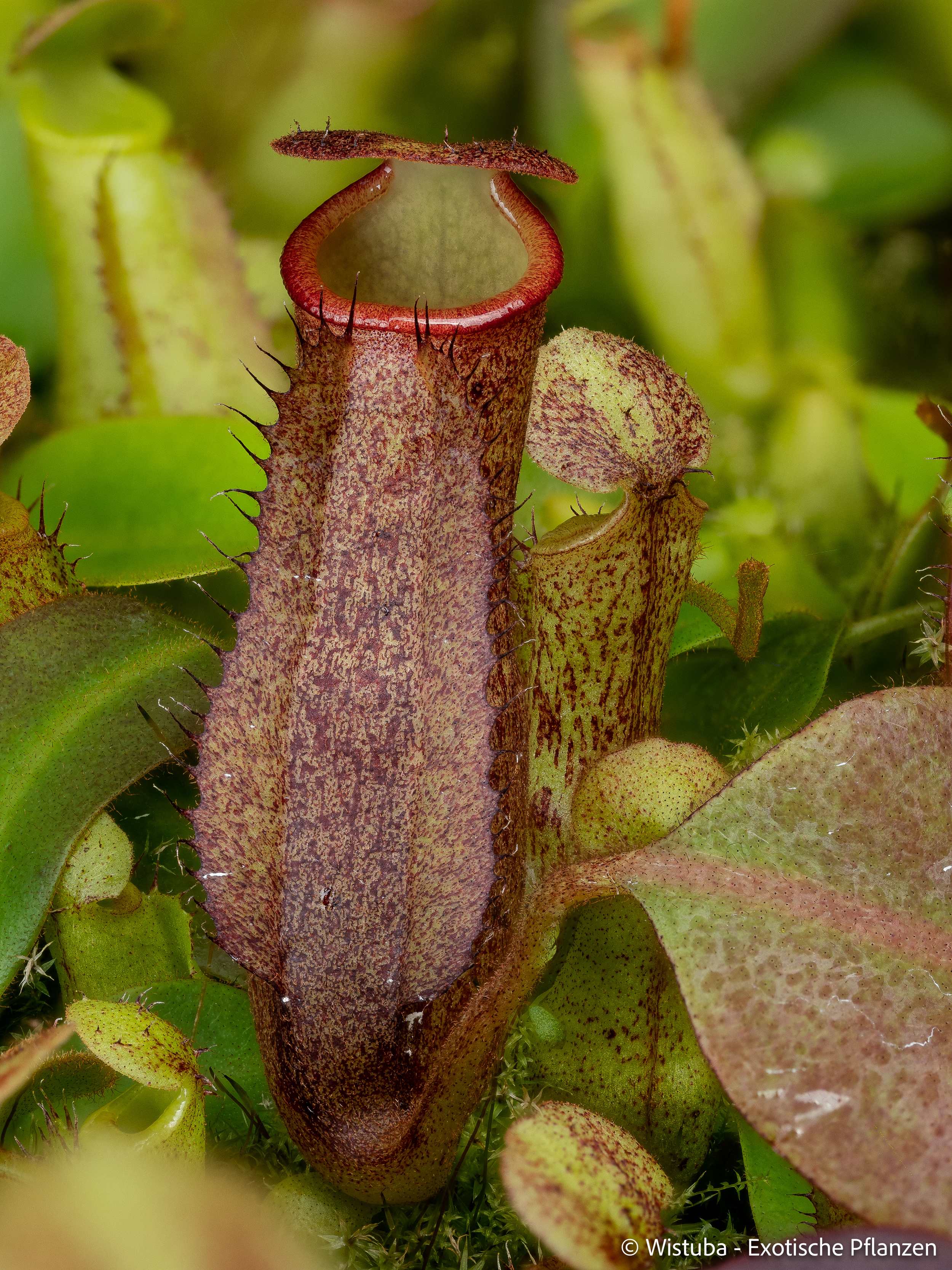 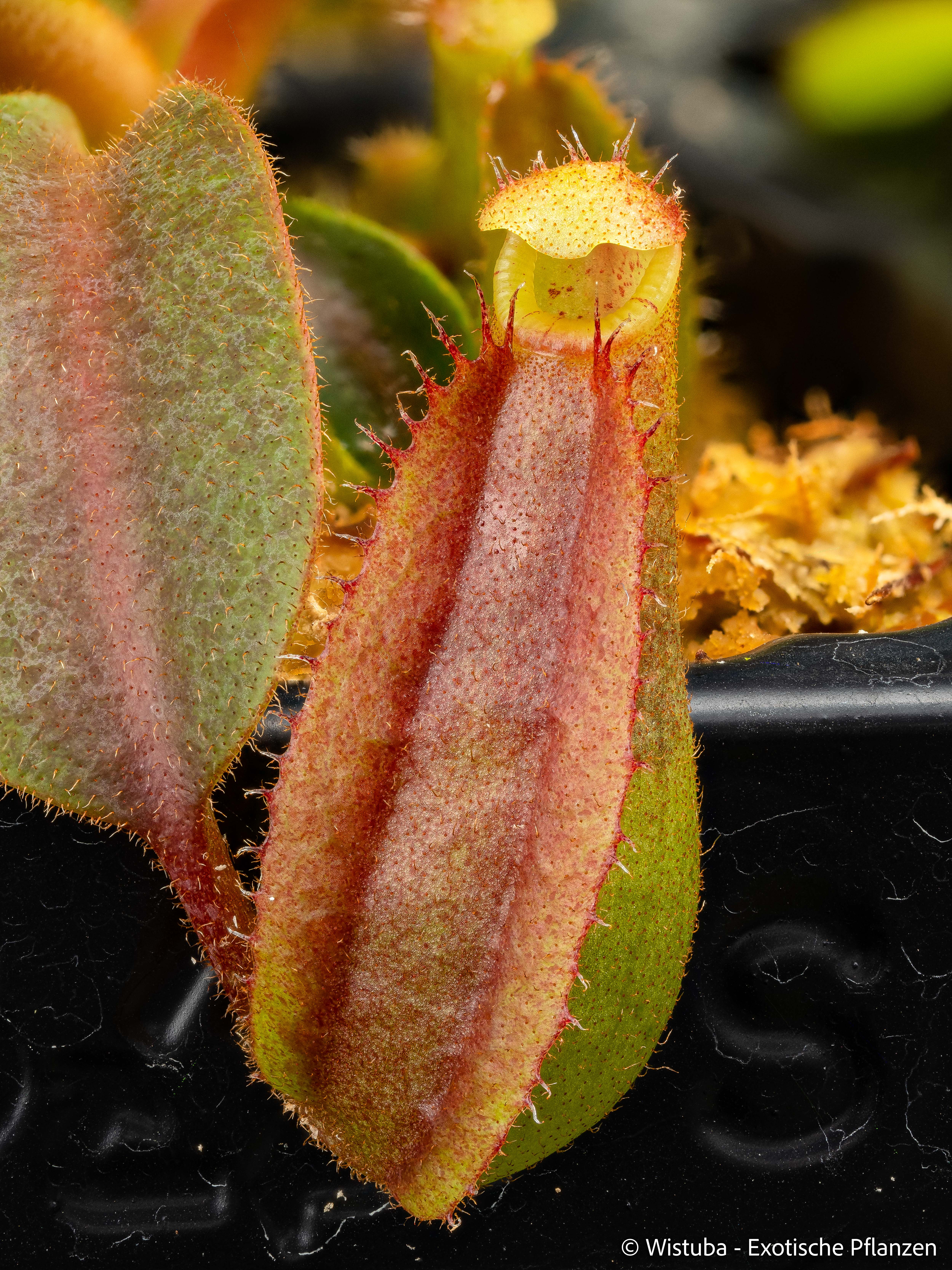 Nepenthes (mollis x veitchii) x veitchii
Nothing can go wrong with these parents!The young plants show heavily hairy leaves and a waxy layer between the hair. The leaf colour is mostly dark.
From €20.00*
Details
Currently only 5 available 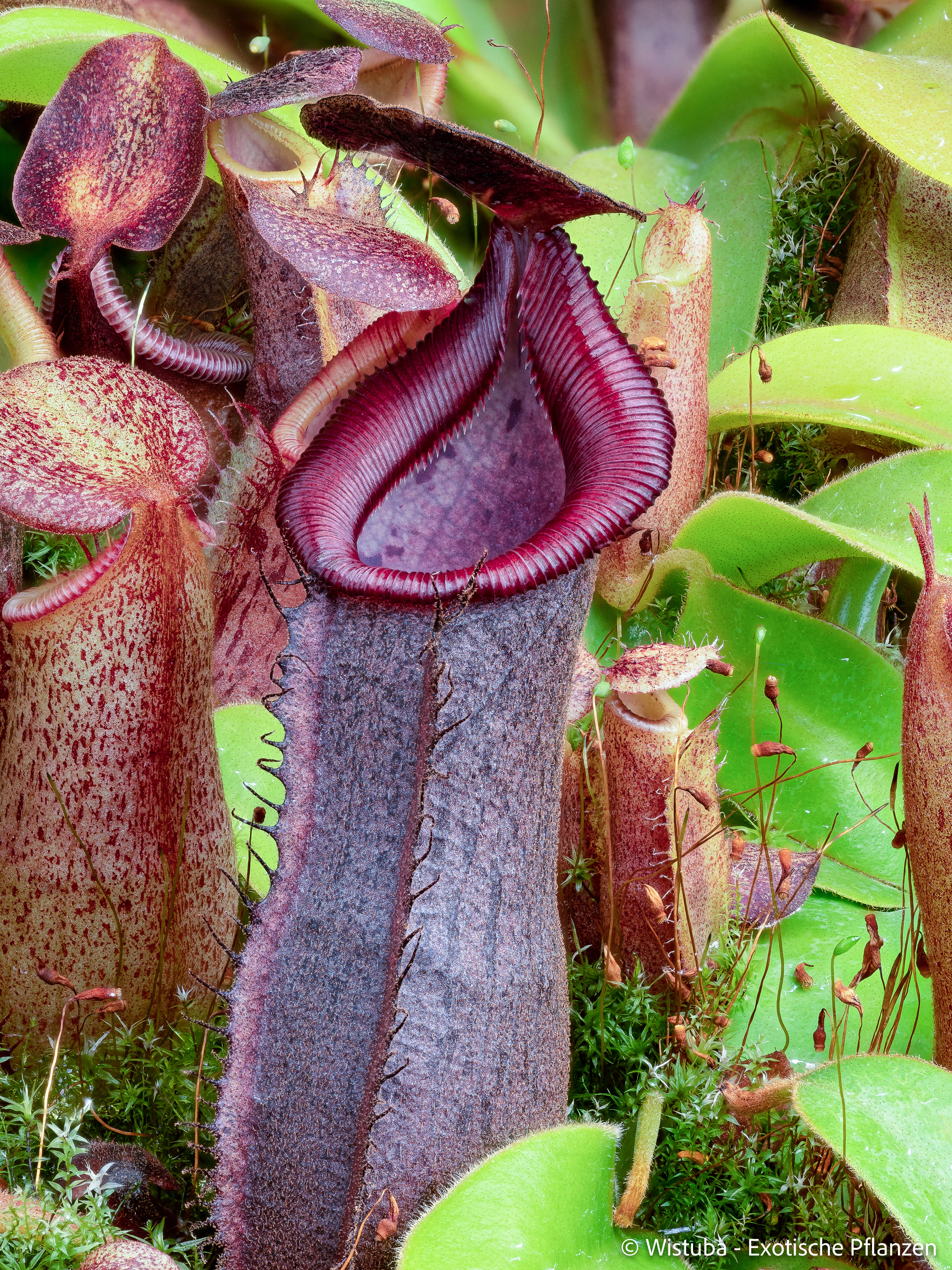 Nepenthes (spatulata x spectabilis) x (veitchii x lowii)
Nepenthes (spathulata x spectabilis) x (veitchii x lowii)The parents provide a pronounced rather flat peristome. So far, the half-grown plants also stand out due to their beautiful color.
From €20.00*
Details
Nepenthes adrianii (Sumatra)
Nepenthes adrianii is often seen as a synonym of Nepenthes spathulata. Nevertheless, there are at least habitual differences between the two groups. Nepenthes adrianii usually shows a green pitcher body and a contrasting peristome, while N. spathulata is usually completely red colored. The form sold here shows a green-yellow basal body dotted with red spots, green serrated wings, and a beautiful dark red-purple peristome that shows its full width shortly after opening and then successively folds back, leaving a serrated peristome when the pitchers are fully formed.
€30.00*
Details
Nepenthes bicalcarata (Sipitang, Borneo)
This carnivorous plant is probably one of the most spectacular and best-known pitcher plants.With nectar glands on its peristome and the two teeth, the plant lures its victims. The two prominent teeth give the plant it's name (Latin: bi = "two" - calcaratus = "spur").The green, orange or red lower pitchers are big-bellied and upper pitchers become egg-shaped. Also eye-catching are the long leaves which can reach a length of 90cm.Nepenthes bicalcarata is often found together with N. ampullaria on acidic or sandy soils.Nepenthes bicalcarata was first described 1873 by Joseph D. Hooker and is only found in the lowlands of Borneo.Nepenthes bicalcarata lives in symbiosis with ants (Camponotus schmitzi). The close associaton with ants was already noted by Burbidge in 1880. This symbiosis is unique among all carnivorous plants making it the only Ant Plant among all carnivorous plants that is known so far. The ants live in the hollow and swollen tendrils and feef from the pray that's caught by N. bicalcarata. Camponotus schmitzii is completely dependent on it's host for both food and domatia offered them and cannot survive without N. bicalcarata. It's able to swim and dive to salvage dead insects from the digestive pitcher fluid. It's not harmed by the digestion enzymes and can climb the inner pitcher surface and peristome. Both surfaces are too slippery for most other insects. While Nepenthes bicalcarata can also survive without ants, Camponotus schmitzii pay their rent by protecting the plants from herbivores and pests and preventing an over accumulation of pray in the pitchers. Easy to grow under hot climate.
From €20.00*
Details 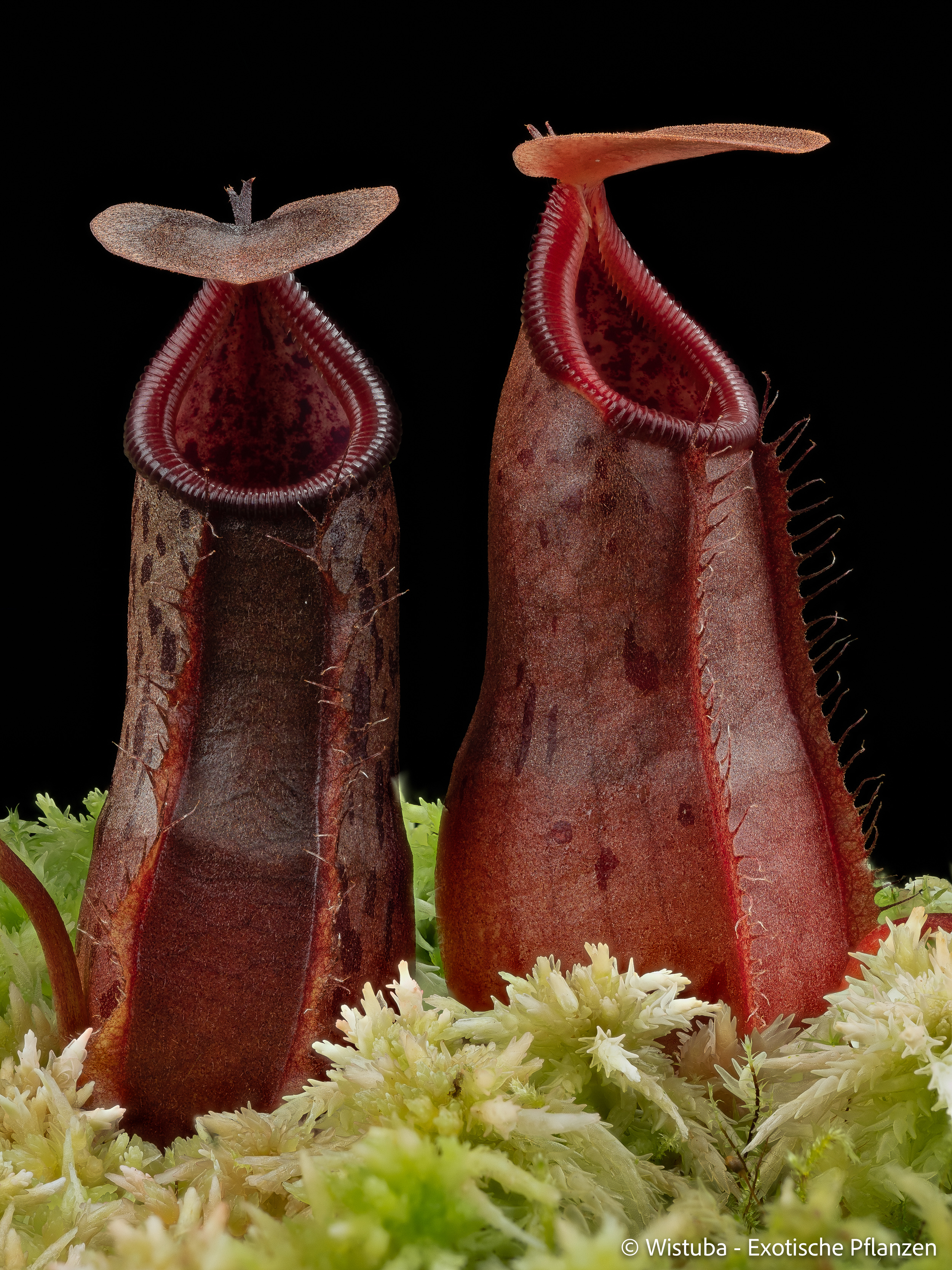 Nepenthes burkei x pitopangii
Nepenthes pitopangii hybrids are still very rare. The lower pitchers are very compact and bulbous with a mostly red base coloration, which is however very variable. The peristome is slightly oval and ribbed, as in Nepenthes burkei. Nepenthes burkei also shows bulbous lower pitchers with a distinct hip and green coloration with red spots. The peristome is red and serrated. To be expected are compact lowers with a probably red peristome and green-red can body.The upper pitchers will be really interesting as they are extremely funnel shaped in Nepenthes pitopangii. How much will this be seen in the high pitchers of this hybrid? It remains to be seen.
€15.00*
Details
Short supply (FAQ)
Currently only 4 available 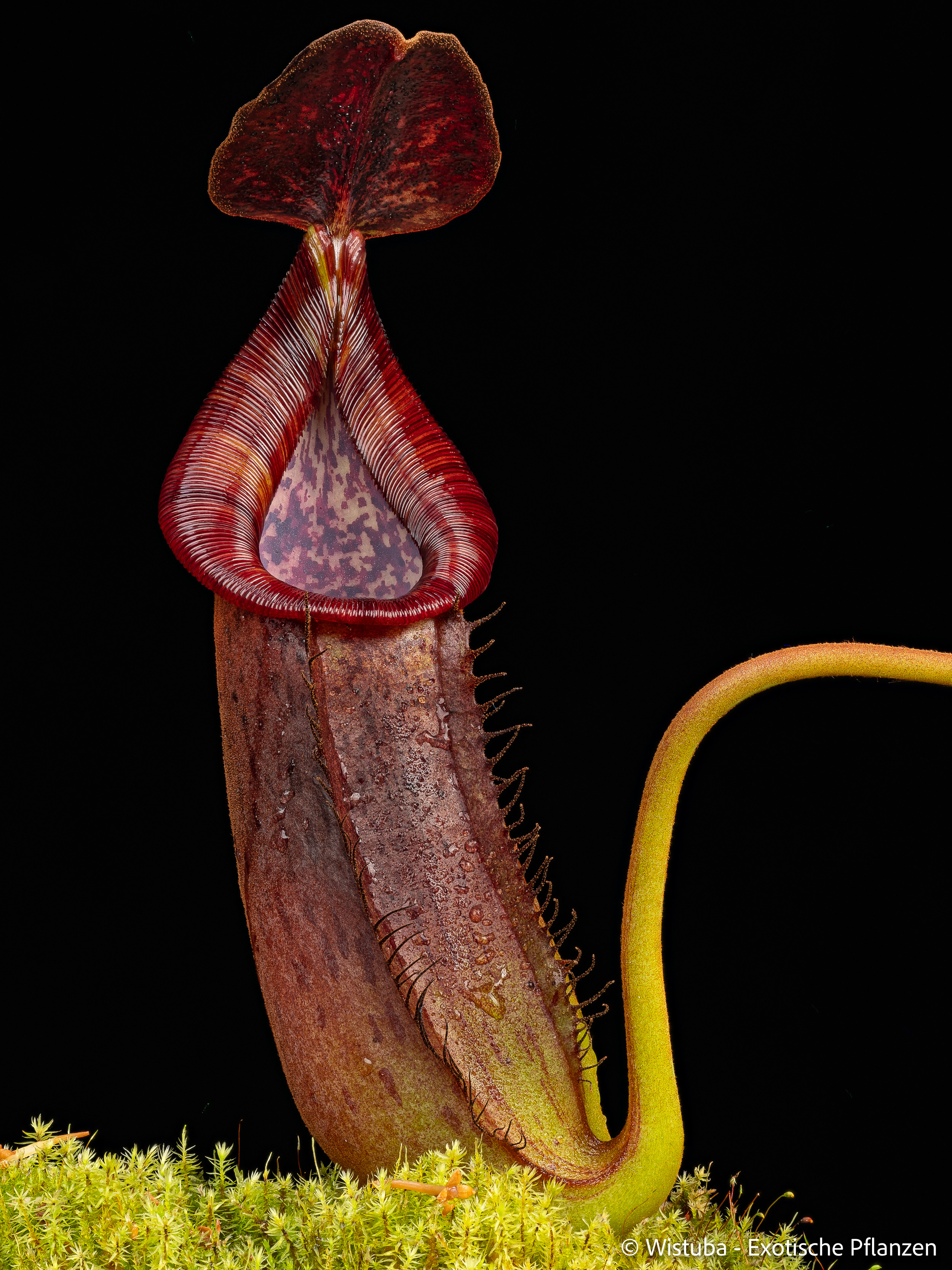 Nepenthes copelandii x lowii
A hybrid that already shows compact bulbous pitchers with a broad, (dark) red peristome in the base pitchers. Already other N. lowii hybrids show that elongated pitchers in combination with N. lowii upper pitchers become strongly funnel-shaped. Here you have the exceptional vigour of N. copelandii in combination with N. lowii and can look forward to a problem-free hybrid with red, funnel-shaped uppers.
€35.00*
Details
Short supply (FAQ) 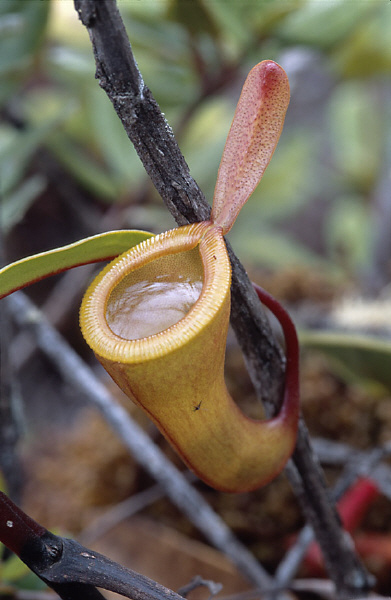 Nepenthes dubia (Gunugn Talamau, West Sumatra)
Nepenthes dubia is known from only two mountains: Mount Talakmau, West Sumatra (1800-2700m asl), and Gunung Malea, North Sumatra (1600m ñ 2200m asl). These plants are from the mountain on which the species was first discovered. The upper pitchers of this form (G. Talamau) always have an orange tint in my experience.Nepenthes dubia is a diminutive and dainty species known from only two peaks in the Barisan mountain range of Sumatra. N. dubia is found growing in mossy forests, either epiphytically at lower elevations, or terrestrially in moss clumps at high altitudes (2200m+) amongst the stunted alpine vegetation. It is a true highland plant, though faster growing than many other highlanders.The name ëdubiaí is latin for ìdoubtfulî referring itís similarity to N. inermis and initially being mistaken for a possible hybrid. Lower pitchers are rarely produced and relatively small, with the rosette stage being short lived. N. dubia quickly vines producing elegant and dainty upper pitchers (8cm). Pitchers are funnel shaped, with the lower part appearing as if pinched and flattened from either side. This creates a very unique and unusual look. While these pitchers strongly resemble those of N. inermis, they differ in having a well-developed peristome. The peristome is relatively (to the small pitcher size) broad and flat, lying horizontally so that the pitchers open upwards. The pitcher lid in N. dubia is also unique in almost always being bent backwards by more than 180 degrees relative to the pitcher opening. The upper pitchers of this species are generally light green to green-yellow in colour, though orange and red forms exist. Lower pitchers are often more colourful, being orange to red in colour. All pitchers produce especially viscous pitcher fluid similar to that found in N. inermis and a few other Sumatran species. This is hypothesized to enable pitchers to function as flypaper traps as well as typical pitfall traps. The characteristic red to purple tendrils found on the majority of plants are also a notable and interesting feature.Overall both plant and pitchers, while remaining small and elegant, possess lots of interesting detail and are incredibly unique and charming. Cultivation Guidelines:Light: Bright indirect or dappled lightTemperature: True highland conditions. Requires cool night time temperatures.Growing medium: An open, mossy but well-draining mix. A mix of high quality sphagnum moss with horticultural-grade perlite, a bit of good quality peat-moss and pine bark works well. The proportion of Sphagnum in the mix should ideally be quite high.Extra notes on Cultivation: Appreciates high humidity levels.
€60.00*
Details
Nepenthes dubia x deaniana
A completely new cross with very interesting parents.I am very curious to see how the seedlings develop further. Given the decidedly interesting pitcher shape of Nepenthes dubia, I see great potential here.
From €10.00*
Details
Short supply (FAQ)
Nepenthes dubia x diabolica
Own hybrid. I am very curious about the result. Nepenthes diabolica as parent promises a strong toothy peristome.
€40.00*
Details 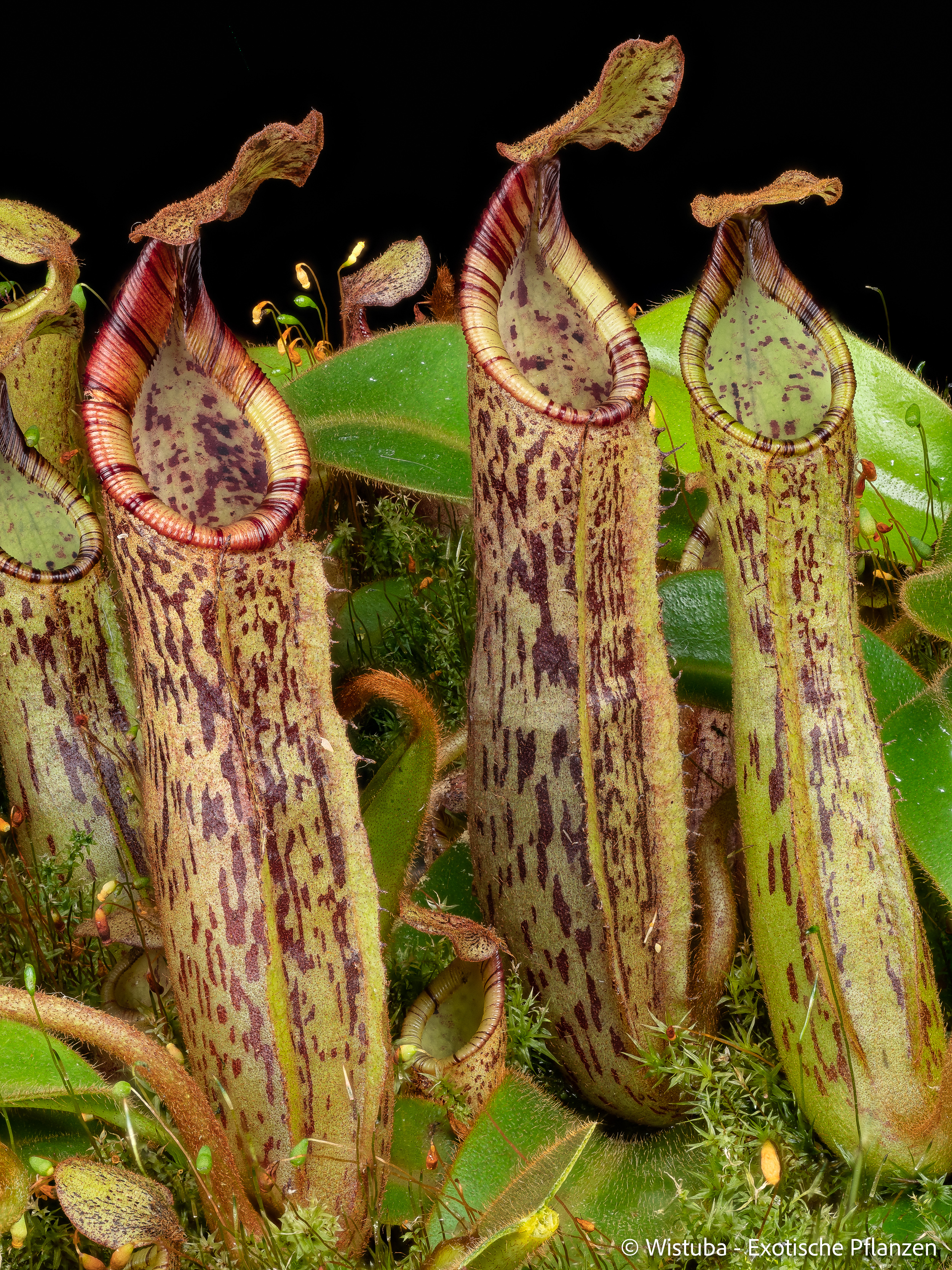 Nepenthes epiphytica x mollis
The first commercially available cross with Nepenthes epiphytica. The interesting elongated shape of the pitcher of N. epiphytica and the extreme peristome of N. mollis. Provided the two characteristics manifest themselves in the cross, we have a real winner!
€40.00*
Details
Short supply (FAQ)
Nepenthes fusca (Kemoel, Borneo)
From €80.00*
Details 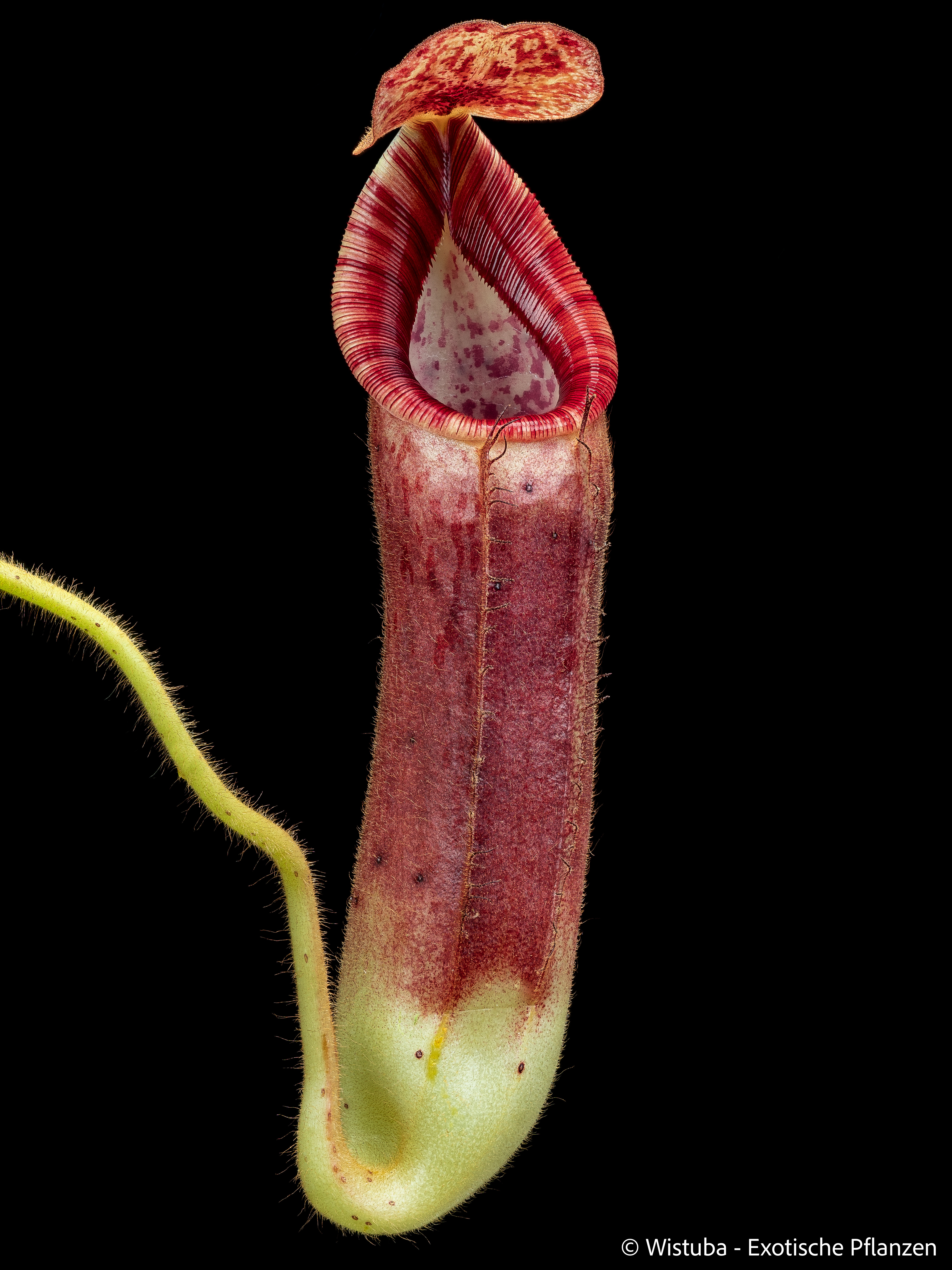 Nepenthes glandulifera x (veitchii x lowii)
Due to the novelty of this hybrid it is difficult to estimate what results this cross will really show. We can expect a hairy, nectary plant with dark, elongated pitcher and dark, striped peristome. It is hoped that the hybrid will take on the size of veitchii x lowii. Also the shape of the upper pitchers of veitchii x lowii with glandulifera influence could be interesting!
From €9.50*
Details
Nepenthes glandulifera x mollis
A cross between two heavily hairy Nepenthes species.The distinctive nectaries of N. glandulifera are found here in abundance on the leaves and the tendrils. The peristome is raised and intensely dark striped. The pitcher body dark with light spots. The hybrid shows the typical white colouring of N. glandulifera under the peristome.
From €24.00*
Details 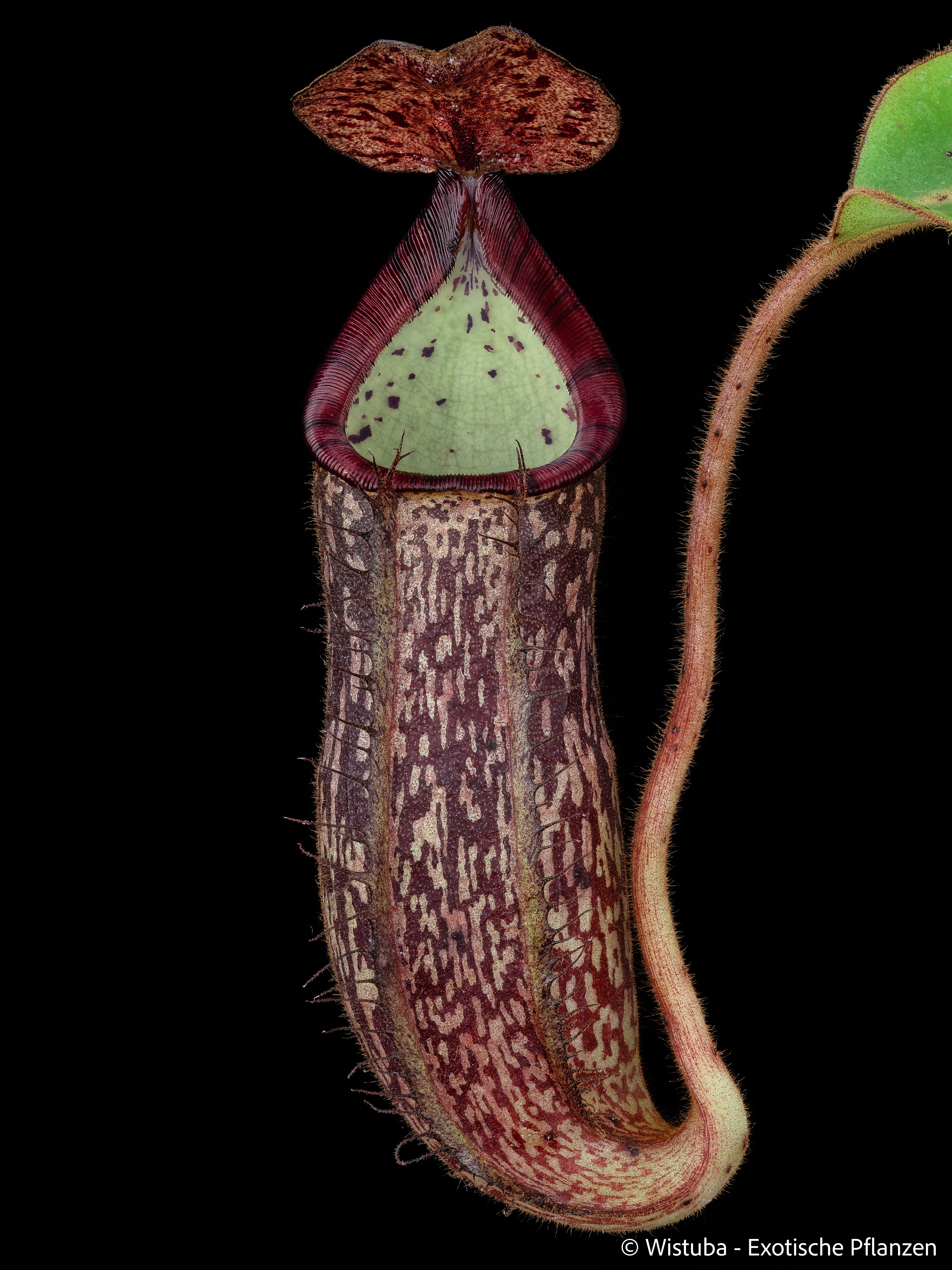 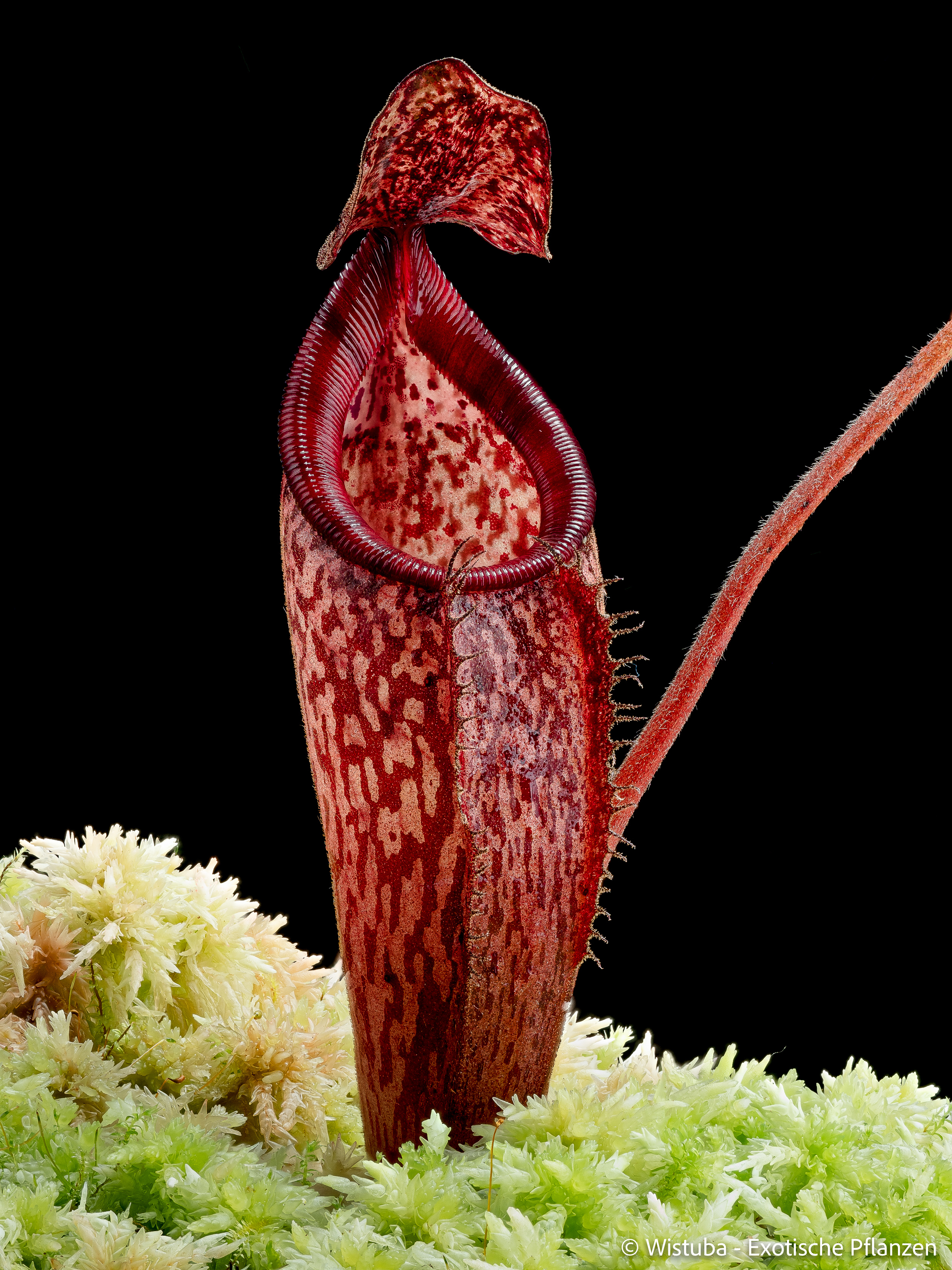 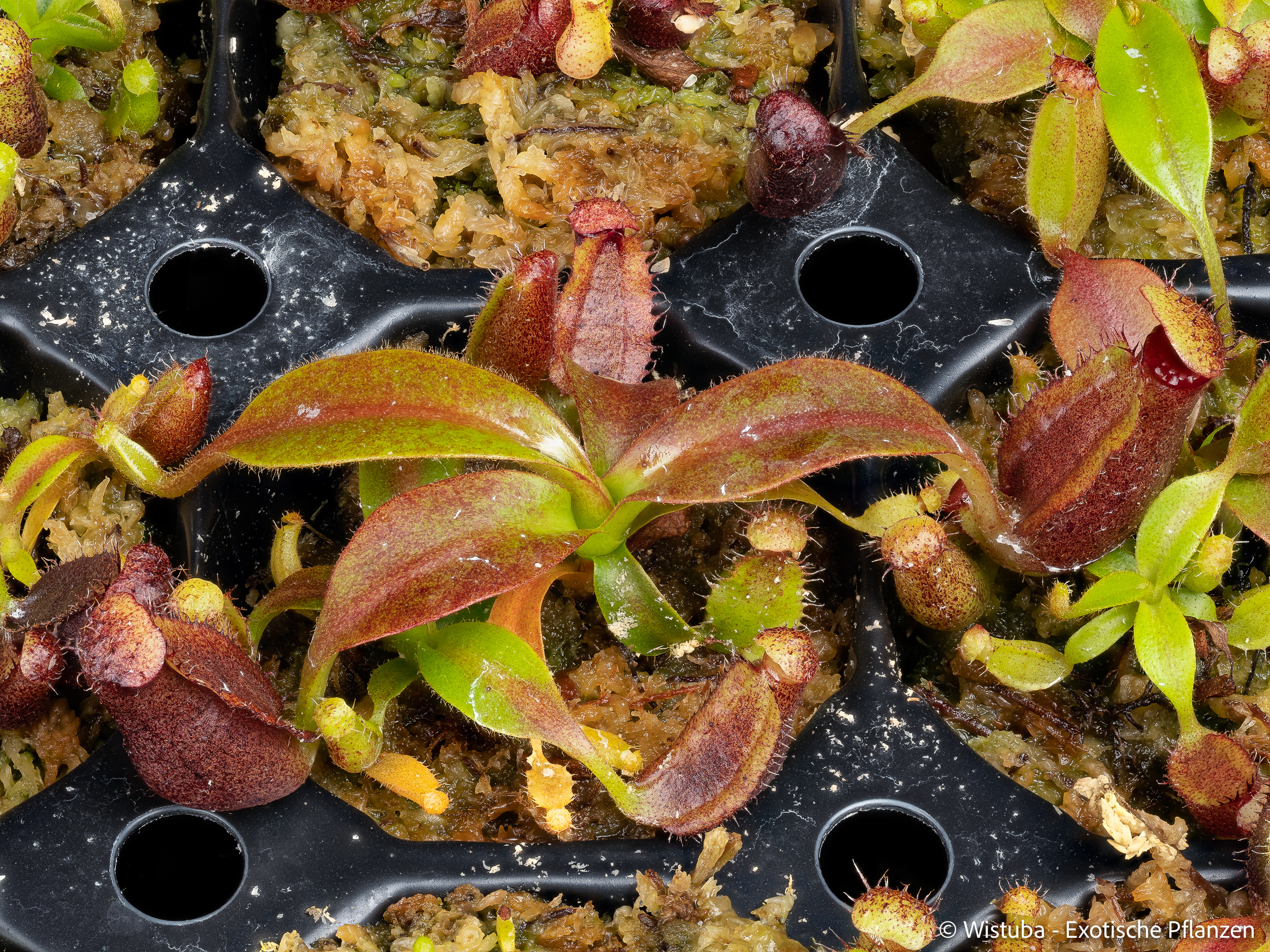 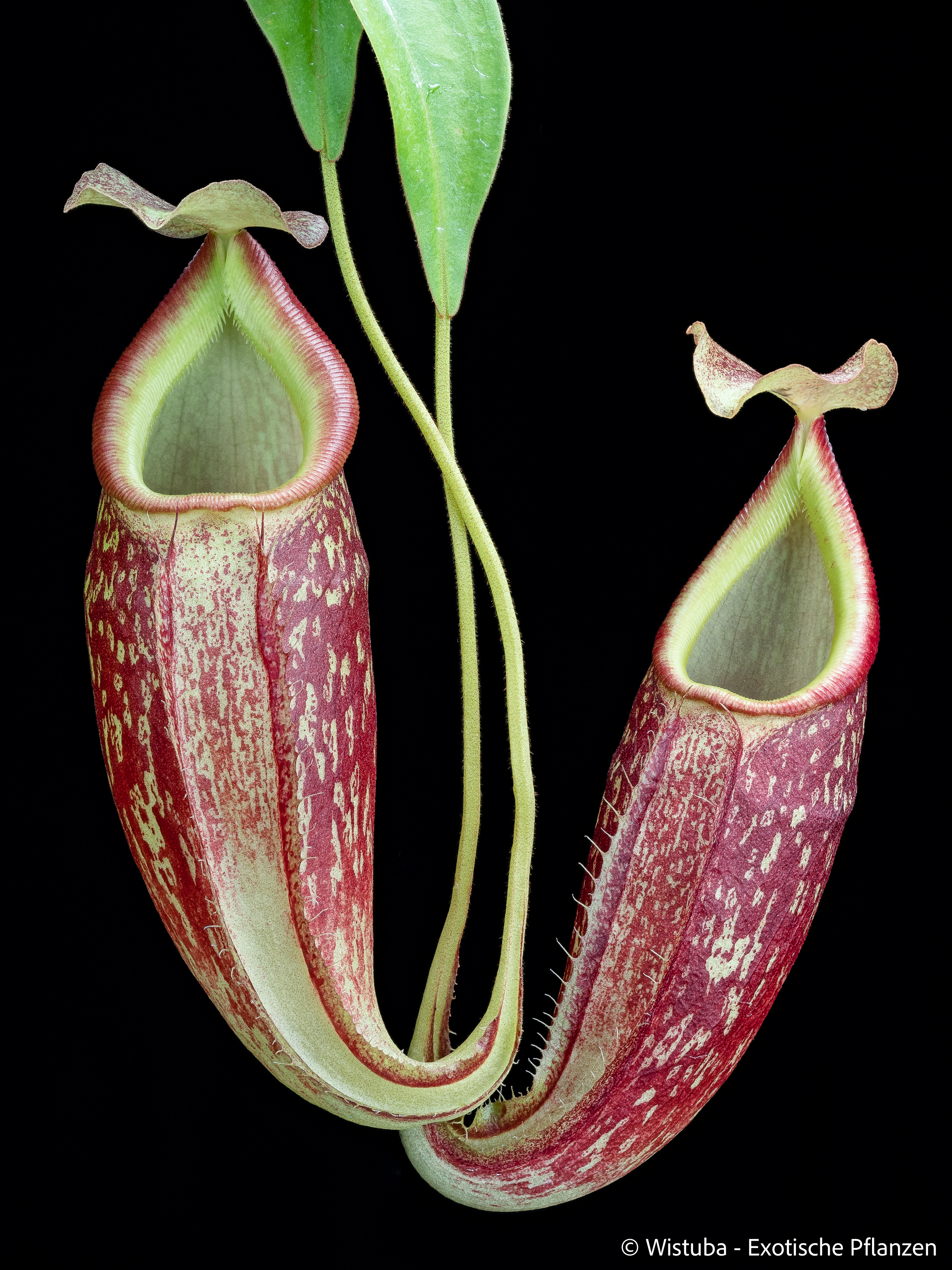 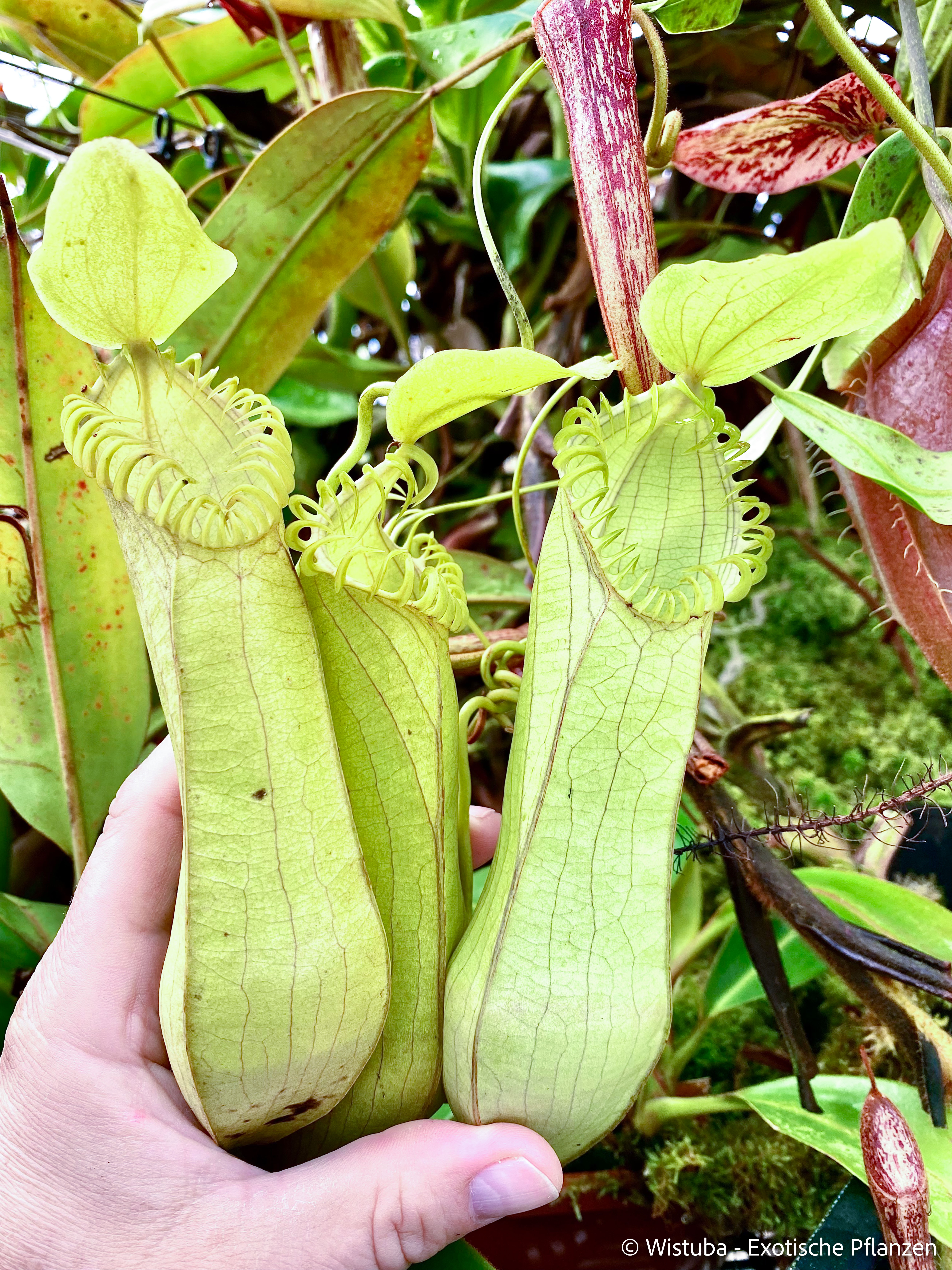 Nepenthes hamata (Gunung Lumut, Sulawesi)
One of the most bizarre pitcher plant species around! While the lower pitchers belong to the beautiful, strongly-ribbed pitcher types, the upper pitchers are incomparable in the genus. The black-brown (sometimes reddish) spotted lowerspitchers show, similar to N. tentaculata, a ring of filiform appendages on the pitcher lid, an oval black peristome with extremely pronounced teeth and ribs. The upper pitchers, however, are green with red veins and the teeth curved outward to resemble the open maw of a monster. In nature N. hamata occurs in Sulawesi at 1400-2500 m.a.s.l. and belongs to the N. hamata group (N. muluensis, murudensis, glabrata, tentaculata). With the right conditions and sensible fertilization N. hamata grows relatively fast.
€100.00*
Details
Summer Break!!! - No shipping before mid-September!!! - Sommerpause!!! - Kein Versand vor Mitte September!!!
More than 25 years experience
Shipping to many countries
Top quality
Own propagation lab
Directly from the producer
This website uses cookies to ensure the best experience possible. More information...